Today is the anniversary of the Bard’s birth. Check out ways to commemorate the day below, complete with cakes, quizzes, quotes and more.

Introducing… Cakespeare! To celebrate Shakespeare’s b-day, the Victoria and Albert Museum in London invited bakers to design cakes inspired by the Bard’s prose. See a few below, or check out the full gallery here. 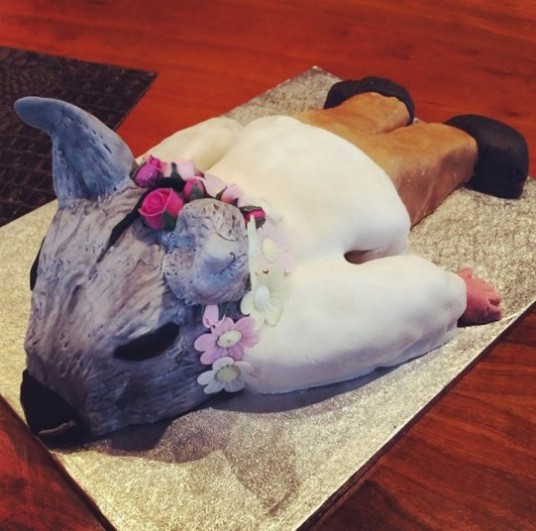 A Bottom-inspired cake, from A Midsummer Night’s Dream

“Chiron and Demetrius in the Pie,” from Titus Andronicus. Looks appetizing…

2. Do you know your Bottom from your Elbow? Taketh a Shakespearean Quiz!

(The weaver in A Midsummer Night’s Dream from the constable in Measure for Measure, that is.) Find out with one of the Shakespearean quizzes below!

Guess the Play by Its Body Count

Which Shakespearean Character Are You?

Whether it’s full on Bard or Shakespeare disguised as a teen movie, celebrate Will’s birthday with one of these tributes to his great plays:

Romeo + Juliet – Baz Luhrman’s adaptation with Claire Danes and Leo DiCaprio as the title lovers sticks to the original script, with the exception of being set in modern-day Venice Beach, California. Still, totally counts as a study sesh if you’re reading the play.

10 Things I Hate About You – Bet you didn’t know this 1999 Heath Ledger and Julia Stiles flick was actually based on Shakespeare’s comedy The Taming of the Shrew.

Shakespeare in Love – Who can resist this imaginary romance between Shakespeare and his muse, concocted by none other than the legendary Tom Stoppard. Transport yourself to another century long ago, when we all still liked Gwyneth.

The Lion King – Oh yes, Disney fans, that whole “prince avenging his father’s death at the hands of his scheming brother” plot is a little Bard original called Hamlet.

4. Lie in the grass with your favorite Shakespearean quotes

We’re counting down our very own top 5 from our list at enotes.com/shakespeare-quotes:

5.  All the world’s a stage,
And all the men and women merely players;
They have their exits and their entrances,
And one man in his time plays many parts,
His acts being seven ages.

4.  What a piece of work is a man, how noble in reason, how infinite in faculties, in form and moving how express and admirable, in action how like an angel, in apprehension how like a god! the beauty of the world, the paragon of animals—and yet, to me, what is this quintessence of dust? Man delights not me—nor woman neither, though by your smiling you seem to say so.

3. Love looks not with the eyes but with the mind.

Life’s but a walking shadow, a poor player,
That struts and frets his hour upon the stage,
And then is heard no more. It is a tale
Told by an idiot, full of sound and fury,
Signifying nothing.

1. Let me not to the marriage of true minds
Admit impediments. Love is not love
Which alters when it alteration finds,
Or bends with the remover to remove.
O no, it is an ever-fixèd mark
That looks on tempests and is never shaken;
It is the star to every wand’ring bark,
Whose worth’s unknown, although his height be taken.

Whichever way you celebrate it, we hope your day is Bard-tastic. Cheers, Will!